All sports codes have their full draws for the term/season on their respective websites and Facebook pages.

Each team has been given a goal-athon card for the Junior Goalathon and Georgie Salter Memorial Dress Up Day on Friday 22nd July (last Friday of the holidays).  Your coach will give you your child’s card.

This is a dress-up day and teams can dress up but you must wear sports shoes.

The draw was unavailable at the time the sports draw is scheduled.  Your coaches will be in touch with you regarding your child’s games.

All JAB rugby games are postponed until the first Saturday in term 3 due to the impending wet weather.  North Otago Rugby sent out an email today advising all clubs about this.

The 5 year and 6 year rippa teams will play their last game on Saturday 30th July and finish with a bbq and drink.

The games are as per the draw.  Any changes will be on the club's Facebook pages. 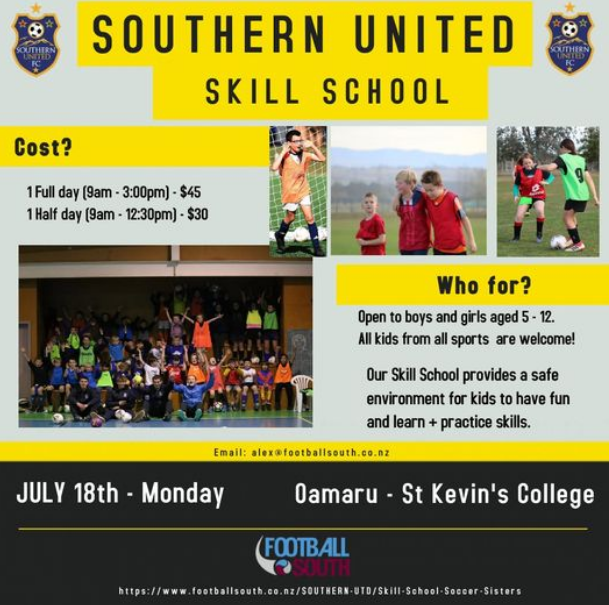 A new 3 x 3 miniball competition for years 5 & 6 children is being played in the first month in term 3.  If your child is interested in making a team, please let Mrs Brien know before the start of term 3 as there is limited teams. I have received names from some players already who wish to make a team.

Benefits of 3 x 3 - more touches, shots, handling the ball, passes, rebounds etc. for players.  On average players will touch the ball twice as much as 5 v 5.

The draw is unavailable at the time the sports draw is scheduled.  It will be available on the North Otago Basketball Facebook page during the holidays and a copy of the draw will be emailed to you on the first day of term 3.

Leonard King Basketball Camp for players in Yrs 4-6 - there are still spots available for this camp at the Waitaki Rec Centre on Wednesday 13th and Thursday 14th July. To register go to https://forms.office.com/r/nhGyQsfRhC

There are still spots available for players in Yrs 7-9 being held at St Kevin’s College on Wednesday 20th to Friday 22nd July. To register go to https://docs.google.com/.../1FAIpQLSfemjReLsn.../viewform...