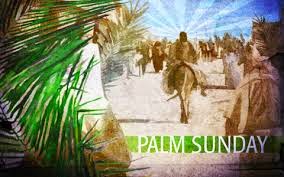 This Sunday we celebrate Palm Sunday.  Jesus starts his ministry in Galilee but the Gospels tell of a journey towards Jerusalem.  Along the way Jesus teaches and performs miracles and gathers a following.  The end point of his journey is Jerusalem and the events of Holy Week.

At that period the Holy Land was occupied by the Romans and under Roman rule.  Many Jews hoped that a king would come to lead the people to freedom.  It is significant that when Jesus arrived at Jerusalem he chose to ride in on a donkey.  He was followed by the crowds who had followed him on his journey and greeted by people from the city of Jerusalem. These people threw down their garments and palm leaves for Jesus to ride over.  This was the traditional sign of respect for royalty.  If Jesus had simply walked in that would have given no message; He chose a donkey, a symbol of peace and not a horse which would have been a symbol of war.  He specifically made the statement to all of those people who hailed him as king, that he was not coming to wage war.

"My kingdom is not of this world. If My kingdom were of this world, then My servants would be fighting so that I would not be handed over to the Jews; but as it is, My kingdom is not of this realm."  Therefore Pilate said to Him, "So You are a king?  Jesus answered, "You say correctly that I am a king.  For this I have been born, and for this I have come into the world, to testify to the truth.  Everyone who is of the truth hears My voice." (John 19:36-37).

We are very proud of some of our students who have come up with ways of raising money to help our brothers and sisters in Vanuatu.

This weekend there will be a collection in Church for the victims of Cyclone Pam and Father Wayne has said he will match everything that's raised.  Check out the Caritas website for more information:

Posted by Lorraine Frances-Rees at 15:39