5. What has been happening during Week 5?

Self-Defence
Last week the Yr 7 & 8 girls were shown self-defence moves by Imogen Coxhead from Dunedin.
Here is an extract from 2 girls that attended the class.
Last week the Yr 8 girls had one and a half days of self-defence with Imogen who is a lady from Dunedin and who travels around schools and teaches girls self-defence. She teaches things like using your voice, instincts and the best stance to kick, punch and run away.  She didn't just show us the physical side but how to keep us safe online and how to be careful and aware of all the people out there that want a victim for abuse mentally, physically or emotionally.  We all agree that we learnt so much and we had the best time.  Tegan Souness and Antonia Black 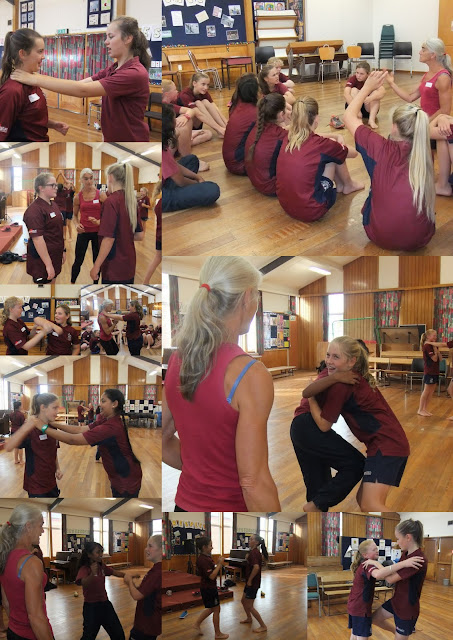 Book Character Dress Up Day
On Monday the school chose to dress up as a book character as part of the Book Fair Week.  Well done to all the children and staff who dressed up as a book character and looked amazing. We had princesses, wizards, witches, animals, pirates, fancy nancy's, thingies 1 & 2, fairy tale characters and lots of other interesting characters.  There were 2 children out of each hub who were selected for their character.  The children chosen were: Luke Edwards, Annelise Johnston, Lewis Gough, James Bremner, Bronson Bartlett, John Orillo, Jack Paton, Zyanya Pe, Cameron Mather and Molly Whittaker.

Hockey Skills
This week Marie McBride has come in to teach the junior school some hockey skills like how to stop and pass a ball to one another and how to safely hold a hockey stick. Each class has had 4 lessons and a big improvement was seen at the end of their lessons.

Jump Jam
Twice a week Miss Lind and some Yr 8 girls lead the whole school in a 10 minute session of Jump Jam which increases their confidence,fitness and coordination and it is something all ages can do.  It is being done during Kotuitui time as it is a chance to everyone to be active and it is something that can be done outside.


Made with Slideshow Embed Tool/div>
Posted by Paula Brien at 15:55