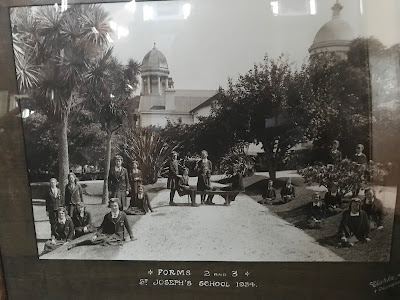 St Joseph's School has a proud and varied history. The first St Joseph's was built as a church/school in 1884. It was located behind the presbytery. The Dominican Sisters, who began teaching in Oamaru in 1882, conducted up to five classrooms in this building. The playground was carved from the hillside by men wielding pick axes and spades and pushing wheelbarrows. By 1928, the Christian Brothers had opened St Patrick's School for boys in Usk Street (our current red brick Junior School). In 1959, the two story block was built and become a school for boys up to Yr 4 and girls to Yr 8. In 1973, St Patrick's closed and Yr 5 & 6 boys joined St Joseph's. Yr 7 & 8 boys went to St Kevin's. It was not until 1984 that St Joseph's became a full primary school for both boys and girls.

By the 1970s it was no longer feasible to run Catholic schools on a the smell of an oily rag when state schools received government funding and were able to pay trained teachers.  So in 1975 the Private Schools Integration Act was negotiated.  One of the conditions of the act was that Catholic schools should provide the same standard of education as state schools.  So the Catholic dioceses in New Zealand had to take out very big loans in order to upgrade the schools. Another condition of the Act was that we were only allowed to take 5% of our roll as non-Catholics.  Up to that point Catholic education was free and provided for everyone who wanted it.  The 5% limitation was to protect the state schools and ensure that we were not taking their students.

When you start at St Joseph's you sign a form to say you will pay the diocesan fees.  These are completely separate from the school and they are a compulsory payment, not a donation.  These fees enable the school to be here and are mainly used to pay off the massive loans we had to take to make Catholic education happen in New Zealand.  The Integration Act requires that we provide education up to the standard of state schools.  In fact Catholic schools tend to out perform state schools in student outcomes both in primary and in high school.  That may be due to the fact that many teachers and principals in Catholic schools have the same mentality as our founding sisters and are truly dedicated to Catholic education of the whole child and every child and will go above and beyond for our children.

Our inquiry theme  in 2018 is "Being a Eucharistic Community."  It is about belonging, and connections within our local community and what it means to be a community centred in a parish dedicated to Eucharist - thanksgiving, gratefulness and the true presence of Christ.
This term we will focus on manaakitanga - welcoming and belonging. As part of this the children will be focusing on the meaning of the mass that we attend each week - and this term it will be about the entrance rite.

We have started the year with a strong focus on teaching positive behaviour for learning - embedding a sense of belonging, connection and gentle responsibility towards each other within our school community.  This is also part of the social sciences curriculum  and we look forward to sharing more about this as we progress.  Personally, I am delighted that recent political changes bring back an emphasis on the whole curriculum.

Our three year charter 2017-19 was developed at the end of 2016 based on extensive parent, staff and community consultation.  We are happy to say we have successfully completed our goals for 2017 (consolidation) and are now on the next leg of our journey - PLATFORM FOR GROWTH.  Our charter is at this link: charter if you would like to read it.  I would love to hear any comments or feedback you have on it.