Student Blogger of the Week
This week's student blogger is Molly Whittaker. Molly has some stunning African artwork, a book review, reasons for supporting having a school dog and a post about sacrifice on her blog. You can access Molly's blog at this link. Thanks Molly for showing us how to Reach for the Stars as Lifelong Learners in the Catholic faith. 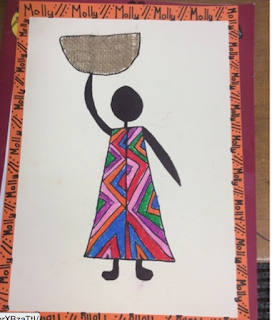 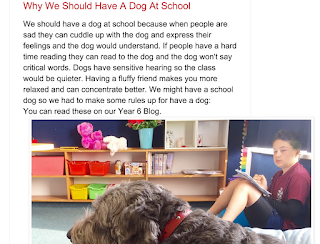 Canine Educator Programme trial and dog visits at St Joseph's
Some time ago, Miss Huls drew my attention to a project where retired greyhounds listen to children read in schools. Since getting a new pup who is a lab/greyhound cross with a gentle and loving nature, I decided to do some investigating. I have been liaising with the co-ordinator of the Canine Educator Programme at South New Brighton. You can learn more at this link. Miss Huls is bringing Jazz the Irish Wolfhound cross for a few sessions to trial this programme. The response from the children has been very positive. You can learn more by going to the Year 6 class blog.The idea is that the dog is there for a short visit in the room in a controlled environment to support learning. Our rules about dogs running loose in the playground still remain. Fiona from the Oamaru library will also be bringing a retired greyhound into school with her owner as part of a dog safety programme. Lulu the Jorgensen poodle has visited on a lead when Susie is working with the children in our school garden. My dog Mika is visiting the juniors for a short session during Discovery on a Friday morning. We will let you know how we progress with this trial. If you have any concerns or worries about this trial, please contact me. 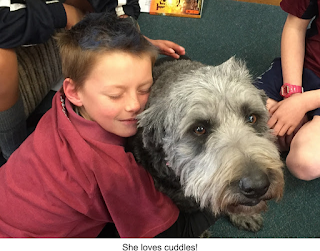 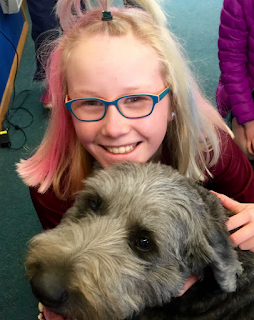 Visitors from the North Otago education sector
Yesterday, we welcomed about fifty teachers into our hall for a learning session with Brian Annan and Mary Wootton. This was a free taster session where they explained about the role they can play in supporting school leaders, teachers and families through their business - Infinity. You can read about the session at this link. 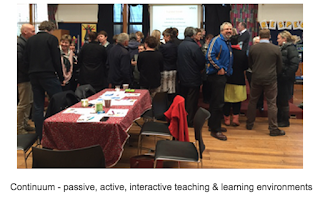 Early assembly and Daffodil Day fundraiser
Tomorrow the teachers will play the Year 8's in our annual Daffodil Day Fundraiser. Children must come to school in their uniform and can wear something yellow, for example, a daffodil, scarf, cap or hair tie and bring a gold coin donation. We will play the netball game at 1:45 pm and follow this with assembly at 2:15 pm. Awards and certificates for cross country and other sporting achievements will take place. 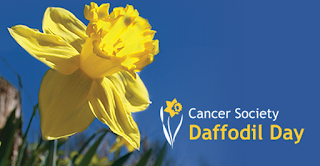 Week 9 is Caritas Social Justice Week. The focus this year is 'Family Ups and Downs'. We will also be looking at how our 'Catholic Social Teaching Principles' help us become the people Jesus wants us to be. In previous weeks I shared the Catholic Teaching Principals of 'Human Dignity' and the 'Common Good'. This week we look at the Principal of 'Solidarity'. This principal is about walking alongside each other and supporting each other through difficult times. Families can also stand in solidarity with other families who need support. When people stand alongside each other they can achieve more than when they stand alone.
Our Parish and St. Vincent de Paul are based on families helping families: families giving away goods they no longer need so that other families can have enough.Your donations to the Parish freezer is another way we can all support parishioners when there is a sickness or death in the family and a little support is greatly appreciated. 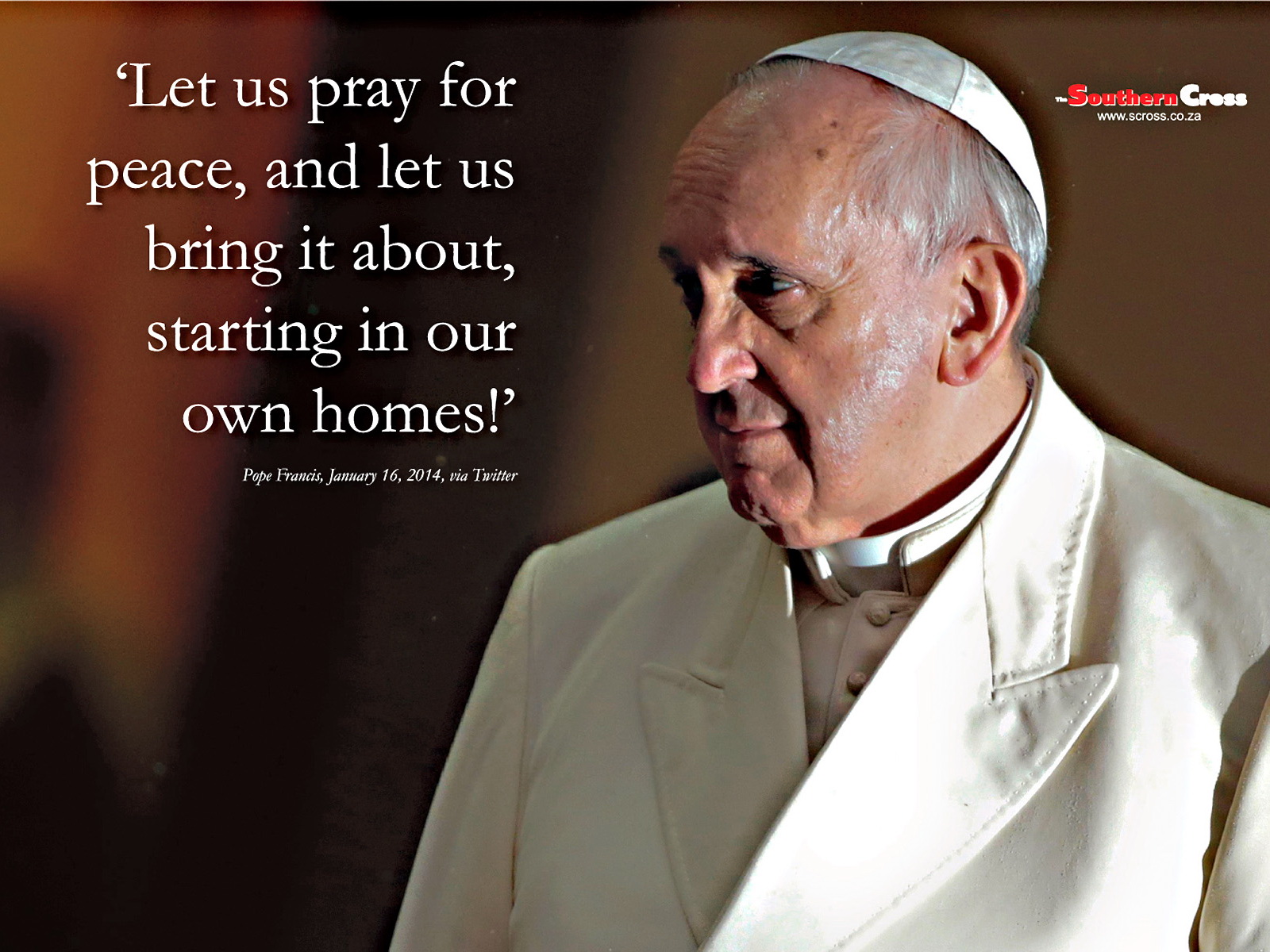 This week we have all begun 'The God Strand'. For some ideas to discuss with your children refer to the pages in your  'Family Whanau' book.

Here are a few other pages you might find very useful.

On Tuesday 1st September St. Joseph's will celebrate 'World Day of Prayer for the Care of Creation' with a special liturgy at Koutuitui (1.50pm). Parents, whanau and parishioners are welcome to join us.

Assembly - Friday 28th August
Will start at 2.15 pm this week as we will be awarding our Cross Country trophies and handing out winter sports trophies to their recipients.

Celebrate Tongan Language Week at the Oamaru Library
Various schools will perform at the library throughout the week. Tuesday 1st September at 12.30 pm, St Joseph's school will perform.

The Adams Family Musical Comedy
We have some students and ex students who are performing in this comedy.  A great chance to see them in action.  Read below in the community notices for more information.

Winter Sports Uniforms
Please return your washed uniforms and put them in the box outside the office and ensure any gear bags are also cleaned and returned.

As the winter sports season comes to an end, quite a few of our players and teams have received trophies for either winning their grades, being the most valuable or most improved players.  Well done to everyone who received an award and who participated in a sport this year.

Basketball
Congratulations to the St Joseph's Saints girls basketball team who won the intermediate grade and the St Joseph's boys Thunder team who were runners up.  Congratulations also to Jacob Fowler and Sivaenga Katoa who both won trophies for being the 'Most Valuable' players in the competition and to Duran Cooper who received the 'Skills and Footwork' trophy.  Well done.

Netball
Congratulations to Laura Mather who received a cup for the  'Most Improved Junior Umpire' this season and to our St Joseph's Steel netball team who won the Intermediate 1.3 grade section 2.  Also to our St Joseph's Gold team who were runners up in the Premier grade.  Well done.


North Otago Cross Country
On Monday some of our students participated in the North Otago Cross Country which was held in damp conditions at the race course.  Congratulations to both Niamh Jackson and Max Fatafehi who got third place in their respective races. Well done to the following students who got top 10 placings: Cody Marshall, Sebastian Spillane, Hotili Asi, Georgia Fox, Duran Cooper and Ben Cullimore.

Cross Country
Recently our school held its annual cross country at the race course in fine conditions.  There was great competition amongst the runners and there were some interesting ways of climbing over the gate!!  Thanks to all the helpers who helped out on the day. 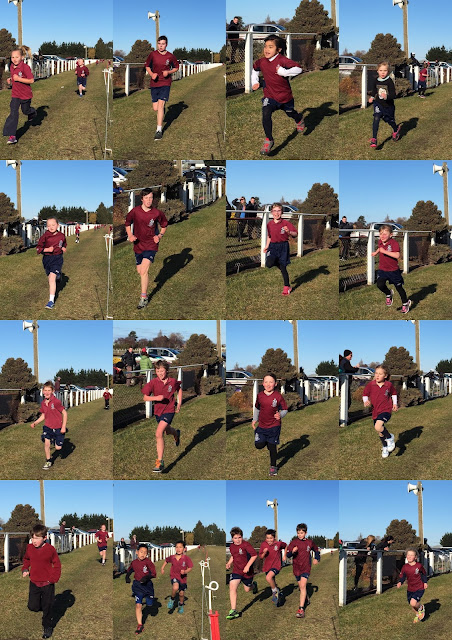 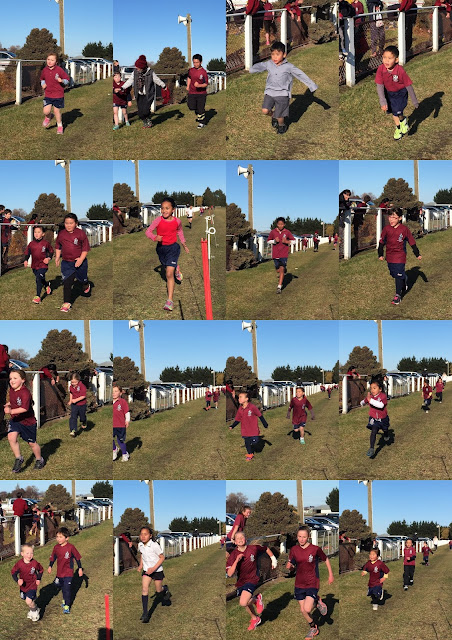 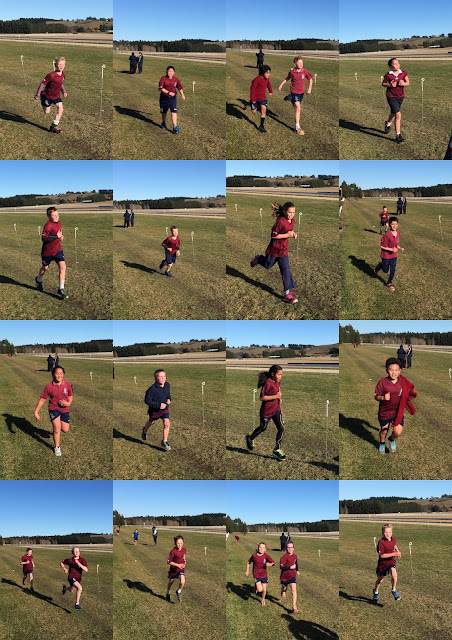 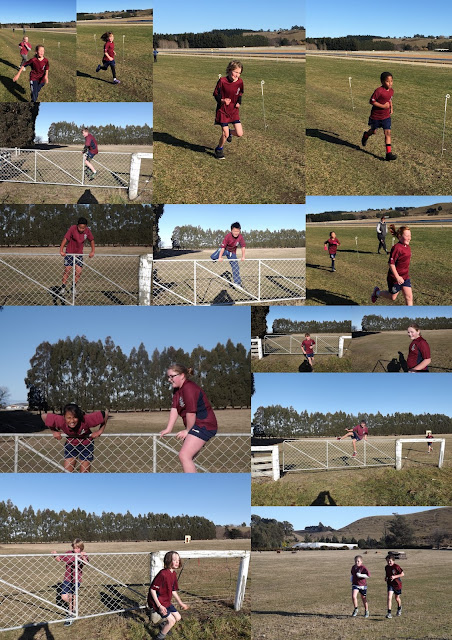 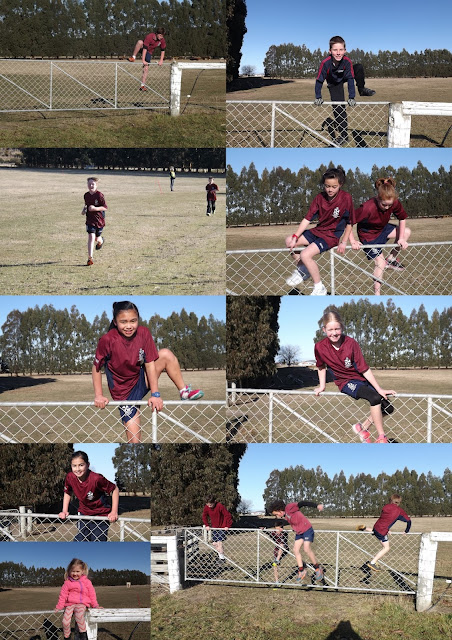 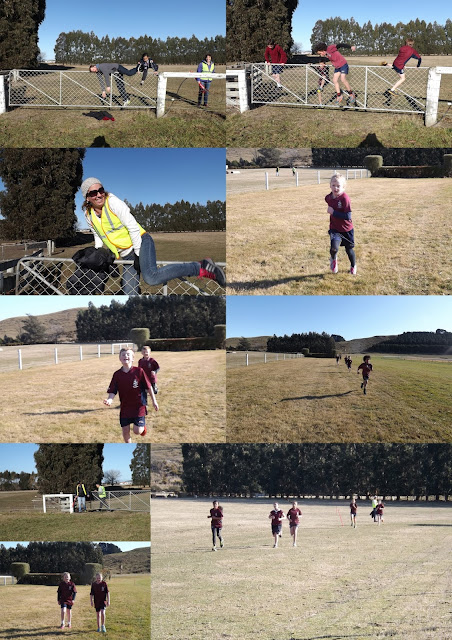 Our Year 7 & 8 students competed in a recent inter-school against St Mary's down in  Mosgiel where we won all of our games apart from the rugby in which we won the shield.  A great day was had by all. 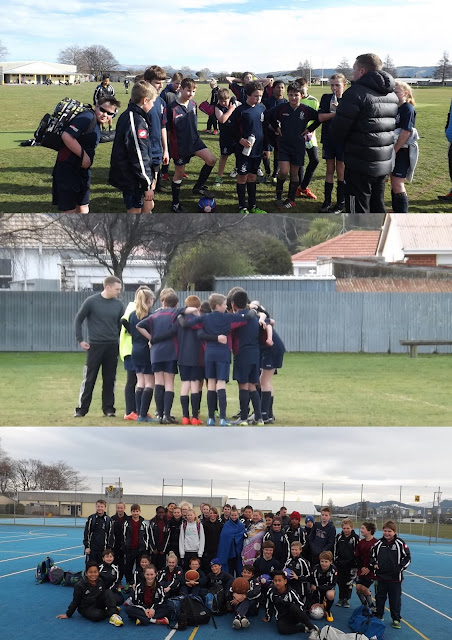 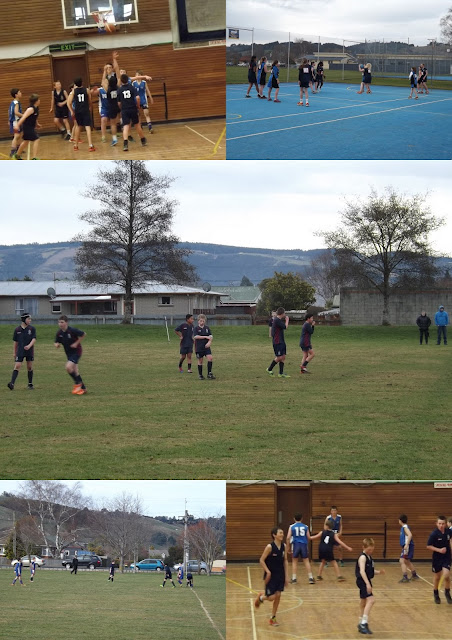 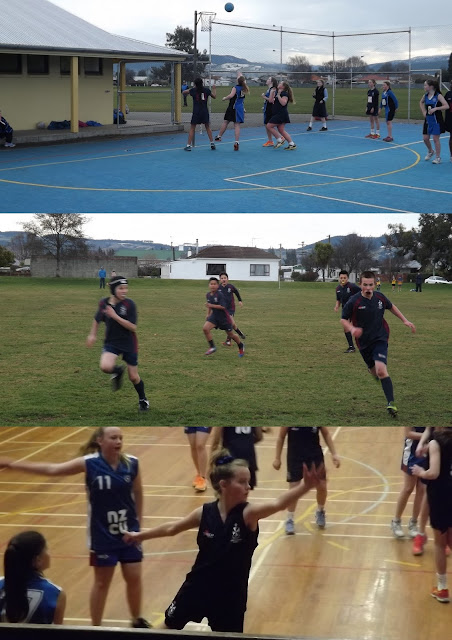 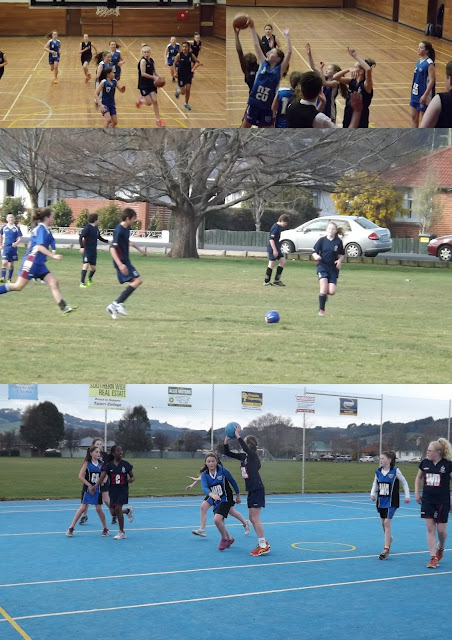 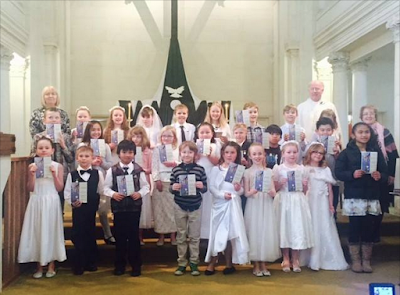 Student Blogger of the Week
This week's student blogger is Laura Mather. Laura is in Year 8 and is our Catholic Character leader. She has a passion for basketball and wants to be a photographer. You can learn more by going to her blog here. 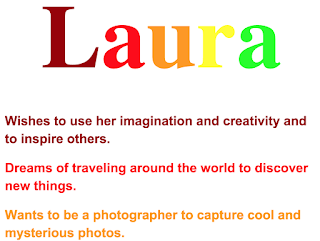 Visitors
This week we have had more visitors to our school keen to learn more about our Engaging Learning Spaces. On Monday Jasen Booton, a leader for Learning and Innovation at the Riverside Academy in Warwickshire, England came to visit. He found our school "vibrant and inspiring" and was impressed with the levels of engagement for our students. One of his highlights was the junior performance for the Kapahaka Festival.
Our second group of visitors were from St Joseph's in Temuka. We welcomed Bernie Leonard the principal, Suellen Robb Yr 7/8 teacher and Ange Hyde Yr 5/6 teacher. They took heaps of photos of displays, interviewed the children and took notes about the way forward for their school. 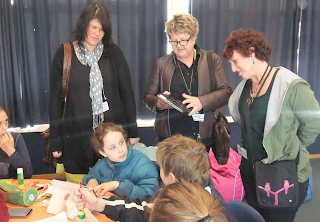 Visit to St Patrick's, Invercargill
Last week I visited St Patrick's as part of a Special Character Review. You can read about my visit by going to this link.

Kapahaka Festival
Well done to all of our junior hub children who performed with pride and mana at the festival this week. Thanks to our teachers and helpers who supported this outstanding performance.
All of our children, showed us how to Reach for the Stars as Lifelong Learners in the Catholic Faith through their well rehearsed performance.

What a wonderful celebration we shared on Sunday 16th August 2015.

Twenty five children received the Most Holy Eucharist for the first time. We have many people to thank for making this day a 'Day To Remember'. We need to thank Father Wayne for making this day special for us all. We also need to thank Mr & Mrs Wylie who supported our parents and Mrs Marsh for organising Prayer Partners for us. We thank our Prayer Partners for praying for us on our Journey of Faith. We also need to say a very big THANK YOU to our parents who are always supporting us on our Faith Journey and helping us look so good!!! 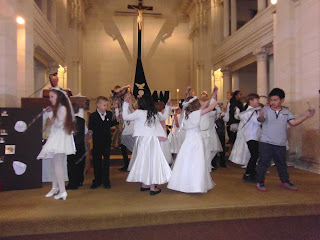 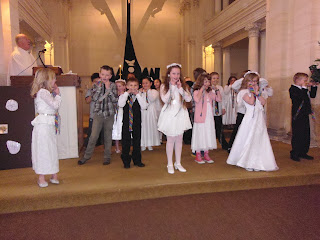 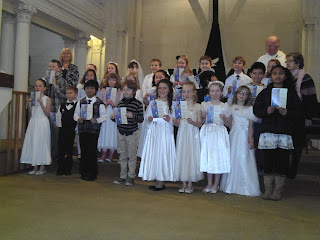 Week 9 is Caritas Social Justice Week. The focus this year is 'Family Ups and Downs'. We will also be looking at how our 'Catholic Social Teaching Principles' help us become the people Jesus wants us to be. Last week I shared the Catholic Teaching Principal of 'Human Dignity'. This week we will look at the principle of the 'Common Good'. This principle means seeking what is best for the group and for the individual. Upholding the common good in family life sometimes means that family members make sacrifices in order that the whole family might gain something. At other times the needs of one individual take precedence over everything else. For example, sometimes a family member may require special care or attention and children learn that caring for this person ultimately makes the whole family unit stronger.