House Basketball Tournament
This week we were extremely lucky to have Matt Brien with us to prepare the house leaders to organise the house basketball tournament as well as run coaching sessions for the whole school.  Matt is an ex-St Joseph's student who now plays basketball for the University of Nebraska.  He's also Paula's son.
Its been fantastic to watch the house captains running drills over lunchtime and younger children participating and learning together.
The house basketball tournament will be next Wednesday starting at 11.30am.  Whanau are encouraged to come and support the children.  Please remember this event is organised and run by our year 8 leaders who are learning how to do this.  It is fiercely contested, as the house points are close this term and the outcome of the tournament could decide the winning house for the term. 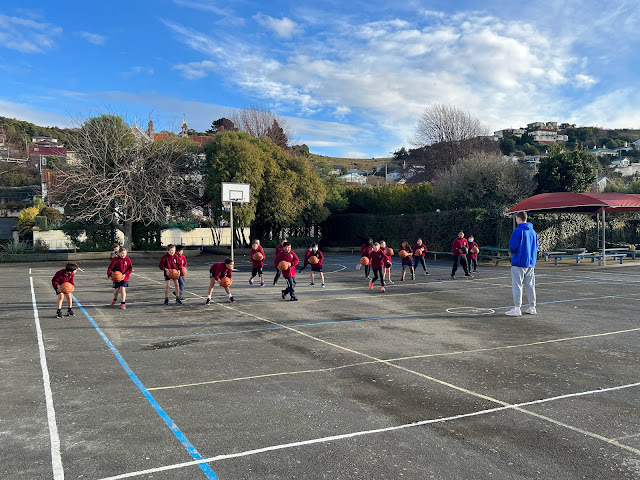 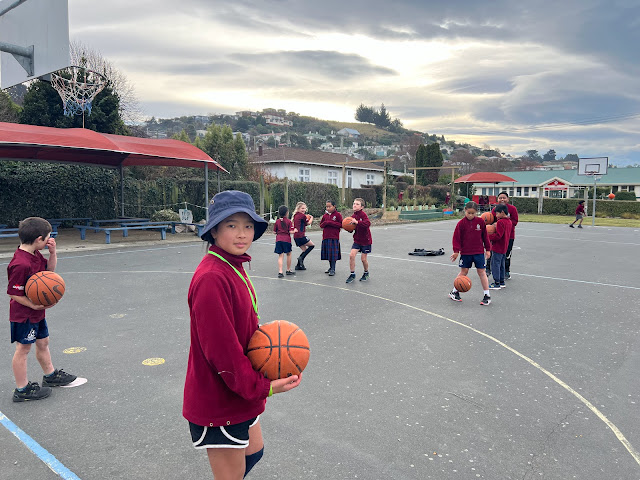 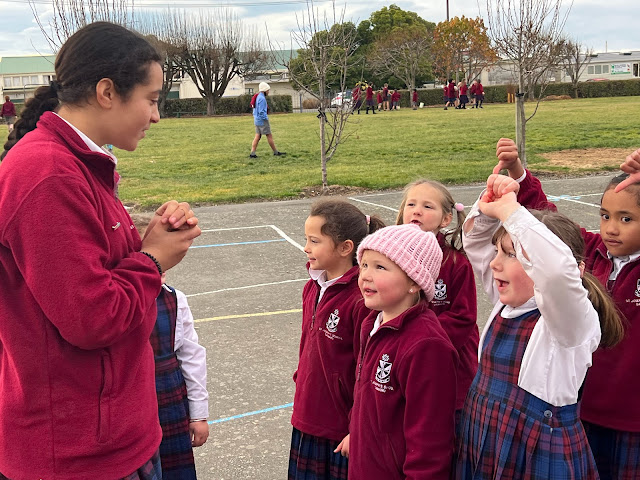 Movie Update
Last week our intermediate students spent two days working with specialist filmmakers learning how to take the dialogue shots which we hope will tell the story of the movie.  They learned how to act to the camera as well as how to be a film crew. 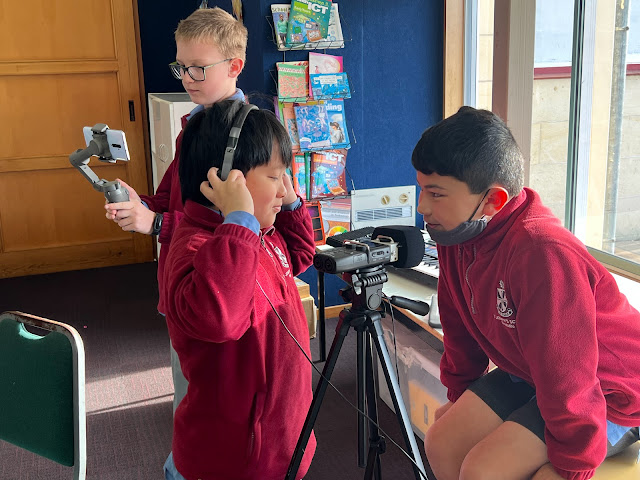 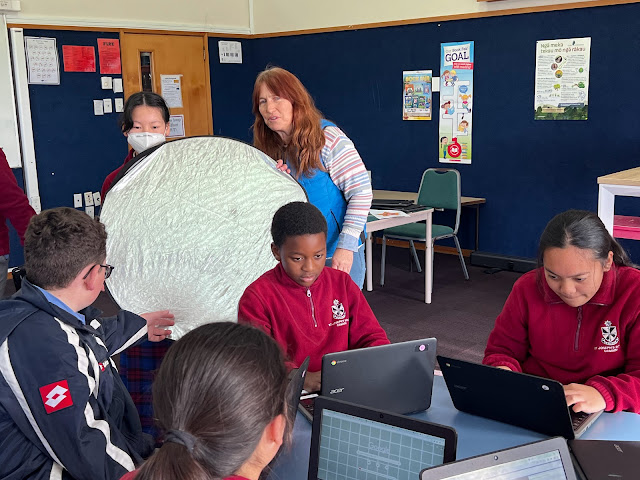 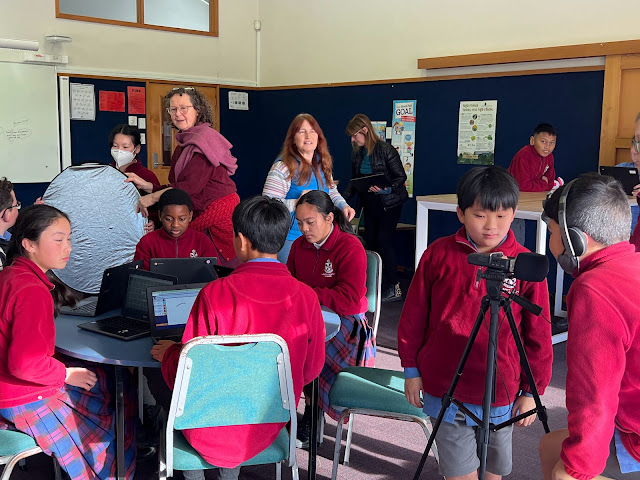 Sacramental Program
Congratulations to our children who received their First Reconciliation yesterday and to Milah and Isla who were Baptised.  Thank you to Mrs Misiloi, Fr Wayne and their parents for preparing them. 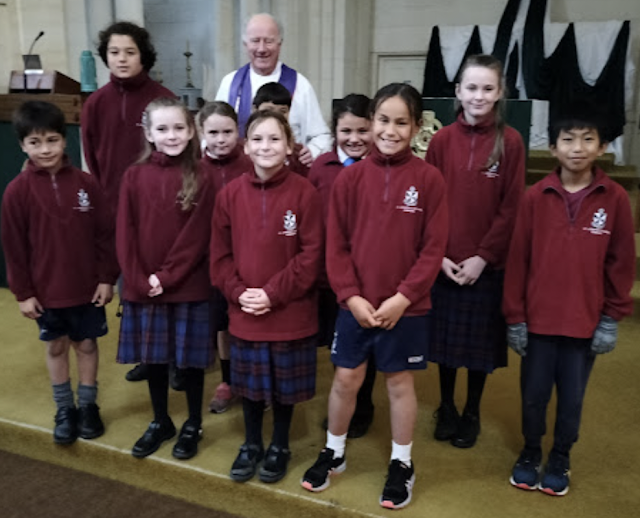 FOOD FOR THE PARISH FREEZER 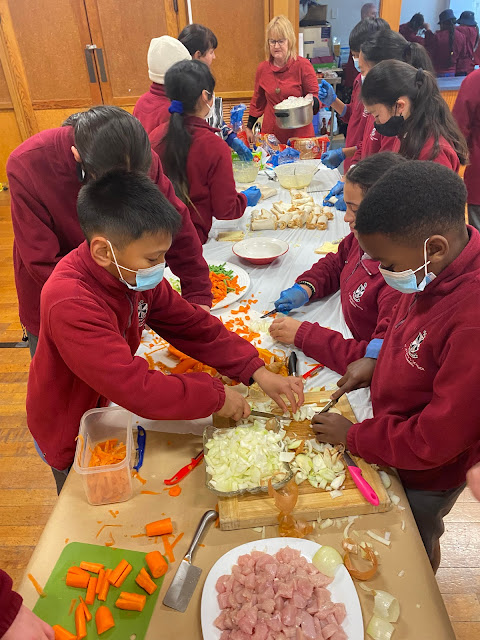 Yesterday our year 7 & 8s prepared food for the parish freezer as part of their Young Vinnies service.  Thank you to Adrienne Spillane, Michele Fatafehi, Rowan Stringer, Adele Whiston and Mrs Winders for supervising Takahe.  A special shout out to Mrs Spillane who initiated and organised the project.  Please remember we would love for families to donate a meal or baking item for our parish freezer then we can reach out to one of our school families in case of illness or bereavement.  Please consider making and bringing a meal or baking for the freezer, because one day it could be your family who receives a little bit of love back from the freezer.
Upcoming
TEACHER ONLY DAYS:
Monday 8th August
Monday 15th and Tuesday 16th November
Our movie will screen next term, date and location are still being decided.
Ma te Atua e manaaki a aroha,
(God bless, and love)
Lorraine
Posted by Lorraine Frances-Rees at 14:07 No comments: Our Sacramental program is up and running. We have 12 children who are taking this faith journey together with their parents. In the past week, the children and their parents attended meetings and lessons for children preparing them for the Sacrament of Reconciliation. Today 10 of our children received their First Reconciliation. We have 2 children who were not able to attend due to them being unwell. A huge thank you to all parents, prayer partners, and people who worked behind the scene to make this Sacrament journey for these children a blessing and a lifelong in the Catholic faith. A great and awesome attendance of our parents and family to our First Reconciliation. Thank you. 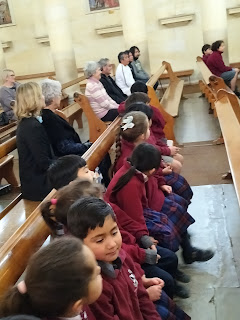 A reminder that our Parent Meeting for Confirmation-

Thank you for your support.

The teachers and children are continually learning about the Church Strand for our R.E Curriculum.

These are our Key Ideas that you can talk about with your child at home of what they understand:

School and Family Mass
Thank you to Ruma Kakapo- Year 4/5 for presenting the Liturgy in Week 7.
This week Mas was presented by Ruma Kiwi -Year 2/3
Next week Mass will be presented by Ruma Kereru and Pukeko -Year 1/2
Parents are welcome to attend. We are looking forward to welcoming you all to our school weekly masses. Thank you. 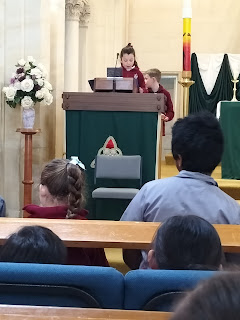 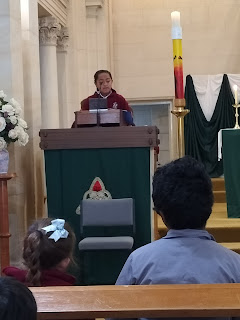 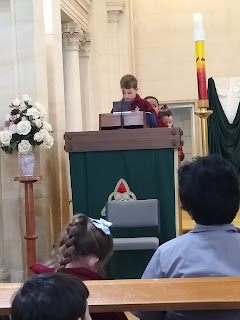 Monday 28 June is the Feast Day of St Irenaeus. Saint Irenaeus was the first great theologian of the Church. His name, which means “peaceful” in Greek, matched the pattern of his life. He is noted for his defense of the Gospel against the various heresies of his day. As Bishop of Lyons, he was always a “good shepherd.” He died in the year 202.  For us in New Zealand, Irenaeus gives us a link back to the Apostles as the first Bishop of New Zealand, Jean-Baptiste Pompallier was from Lyon.

In his homily on Sunday 6 March Archbishop Paul Martin spoke about God’s call: “...we celebrate the call of God to each of you…God is not a private call, something you get that you hold onto and dig a hole and hide away.  It is a call that takes you beyond yourself to your brothers and sisters in faith.  The very nature of God is Community - Father, Son and Holy Spirit. He calls us to live in relationship with Him in community, with other people who want to respond to His call.” 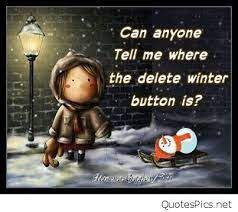 Birthday Greetings to
Kaycee-Mae G, Carter F, Jayden H and Ellie J
Basketball House Tournament
Next Wednesday is our end-of-term house basketball tournament being held at school from 11.30 to 1.00 pm.  Your child will be notified if they have made their house basketball team and parents/caregivers are welcome to come and watch.  The house year groups are:
- Yr 1 & 2
- Yr 3/4/5
- Yr 6/7/8
Children are asked to wear their house colours on this day to school.
Basketball Session
Children learning skills and playing a game from the basketball sessions and a catch up with a teacher and past pupil. 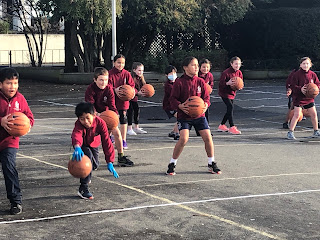 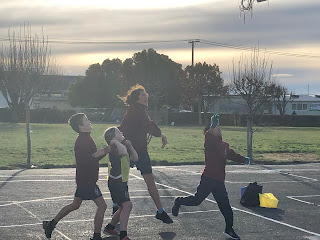 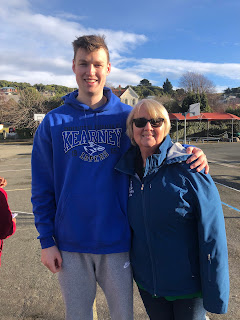 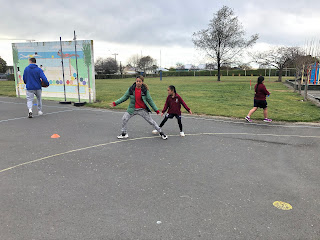 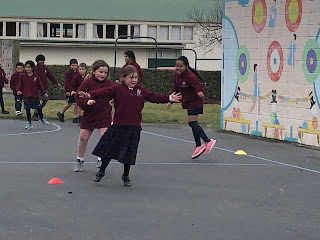 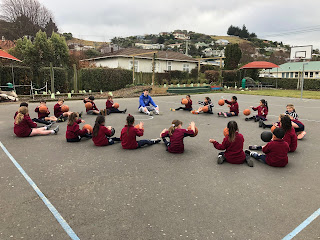 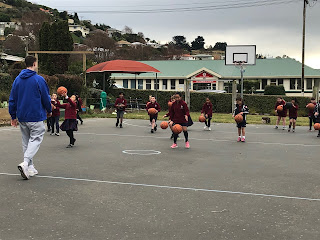 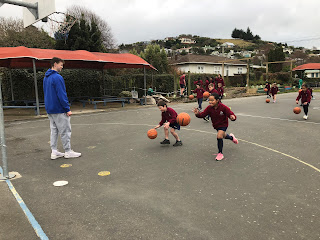 Found
A watch has been handed into the office which was found in the school car park earlier this week.
Junior School Publishing Party
You are invited.  The junior school have been busy this term and it is time to show off their hard work.  Please join their class as they celebrate their learning.  Date is Tuesday 5th July from 8.30 am to 9.00 am.  The location is your child's classroom.
Reminders
Wednesday 6th - house colour mufti day
- school assembly at 2.45 pm
Thursday 7th - St Kevin's College Application forms due back
School Board Elections - Parent Election
Nominations are open for the election of 5 parent representatives to the school board.  All eligible voters will receive a nomination form.  Use this form to nominate yourself or someone in your community.  You will also receive a nomination covering letter calling for nominations.  Information on who is not eligible to be a board member is provided with the nomination form.
If you need more information, contact the school office.  Nominations close at noon on 3rd August 2022.  You may provide a signed candidate statement and photograph with your nomination.  The electoral roll is held at the school and can be viewed during normal school hours.
As nominations are received, there will be a list of candidates' names kept at the school up until election day, which you can view.  Voting closes at 4.00 pm on 7th September 2022.
Sports
Draw
The draw for this week is on another page in the blog.
Basketball July Holiday Programme
Total Basketball Oamaru is excited to bring back our July holiday programme, after a very successful programme in 2021. The programme will run in the July school holidays. Coaching Sessions will be held at the St Kevin's College gymnasium ( Wednesday 20 July to Friday 22 July) and the Waimate Events Centre (Monday 11 July).

This programme has been designed to enable young players (Years 7 - 9) in the Waitaki & Waimate district to access high quality and specialised coaching without having to travel out of the area.

There is a special "Girls Only" session available for those girls that would like to attend this session.

Please complete the following form to register for the July holiday basketball training programme.  The focus will be on specialist and up to date basketball training, working on developing ball handling, dribbling, and passing skills in a fun and supportive environment.

Space is limited and you will need to register. You can choose which of the sessions (two hour sessions) that you would like to attend at $25 per session. Payment needs to be made before attendance at the session(s) please.   https://docs.google.com/.../1FAIpQLSfemjReLsn.../viewform...
St Kevin's Open Day and Evening
Presentation and tours begin at 1.30 pm and 6.00 pm on Wednesday 3rd August.
Welcome
We warmly welcome Gihansa to our new entrants class this week.

All sports codes have their full draws for the term/season on their respective websites and Facebook pages.

NETBALL - information from North Otago Netball regarding our grades

We have 1 rain day allocated, and if required games will be pushed out 1 week, with finals being played no later than 12th August for Juniors, and 20th August for Seniors.

There is a sausage sizzle being held at the Taward Street netball courts on Friday.  Please bring cash.

Please note this week is the last week for miniball because the North Otago Basketball association are organising a new 3 x 3 miniball competition for years 5 & 6 children only for the first month in term 3.  If your child is interested in making a team, please let Mrs Brien know asap as there is limited teams.

Benefits of 3 x 3 - more touches, shots, handling the ball, passes, rebounds etc. for players.  On average players will touch the ball twice as much as 5 v 5.

**Note the Rebels team has two games this week**

no score bench duty this week for either team

All basketball games are cancelled as Oamaru Intermediate has an interschool in Dunedin that day.

The teachers and children are continually learning about Church Strand for our R.E Curriculum.

These are our Key Ideas that you would like to talk about with your child at home, of what they understand:

Thank you to Ruma Kakapo- Year 4/5 for presenting the Mass last week.

This week, there was no Mass due to the funeral of Terry at Church.

Parents are welcome to attend. We are looking forward to welcoming you all to our school weekly masses. Thank you.

A huge thank you to all parents who attended our first parent meeting for First Reconciliation. Also an awesome attendance of our parents and family to our Commitment Mass. Much appreciated for taking the time to attend and participate in this faith journey. Thank you.

A reminder that our 2nd Parent Meeting for Reconciliation-

Thank you for your support. 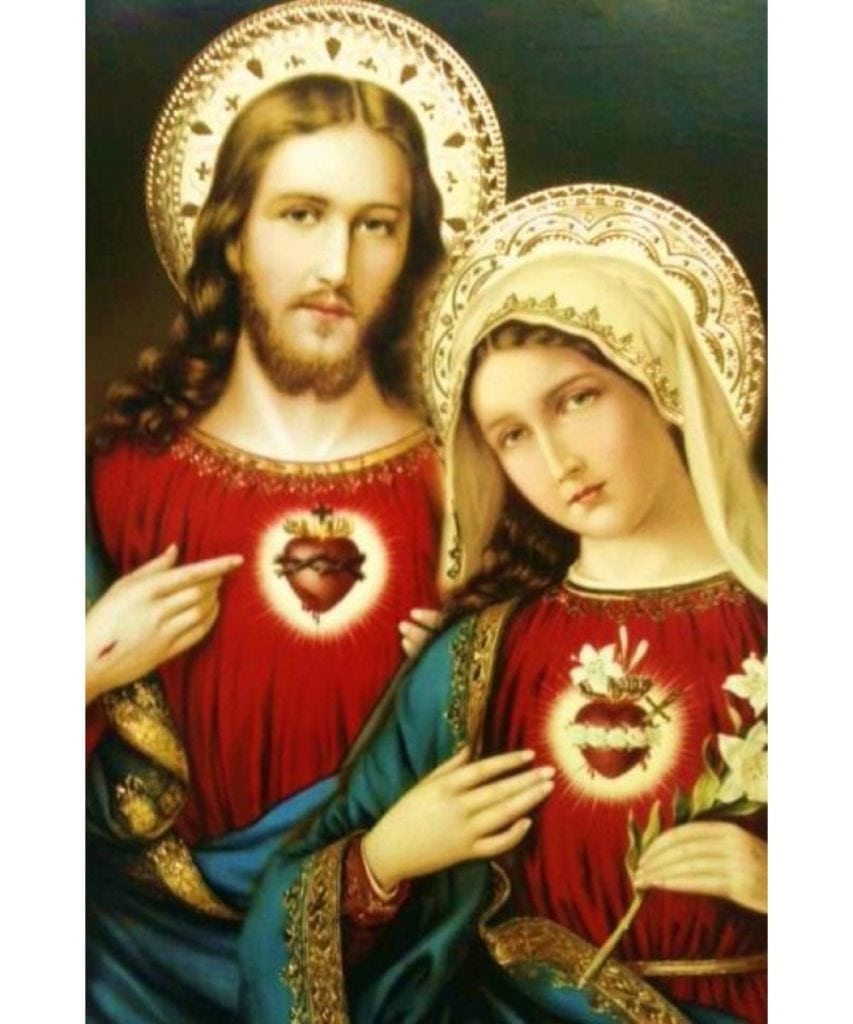 The Sacred Heart devotions are very old dating back to the 10th and 16th Century.

Sacred Heart of Jesus, a feast day for two of our schools, celebrates the humanity of Jesus and his love for us. Immaculate Heart of Mary, this day is to highlight Mary’s love for all people.